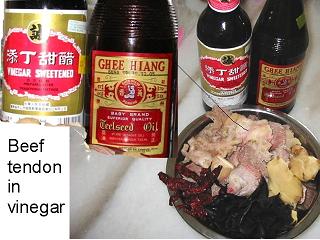 I had been meaning to share this recipe for a long time but each time, I can’t get a decent photo.Â  The above is an old-old photo which I cooked during my confinement.Â  I used beef tendons and also gluten balls in place of pig’s trotter.

1 large handful of black fungus (the thick, big ones) soaked

1 large piece of ginger, break into smaller pieces, skinned and bruised (pic below is how big the ginger should be) If you like, boil several eggs, peel and add into the soup when it is cooked. I had done this with beef tendons which give me very tasty results and so does gluten balls.Â  (some whitish, rubbery balls bought fresh from vegetarian supplies store)

This is one of the staple of Chinese post-natal mom’s food.Â  My mom told me that it is supposed to make post-natal mom lactate more and true enough, I did experience an increase in milk production.Â  Anyway, this is a very delicious dish and keeps well.Â  The addition of chillies and black fungus make it less oily.Â  If you are afraid of the oil, just leave the dish in a fridge and remove the white, hard lard.